I've started playing with Google's Chrome bwser. At first, I thought it was mostly a toy and not a good replacement for my trusty Firefox. However, the funniest thing has happened. I've started to grow to like it. 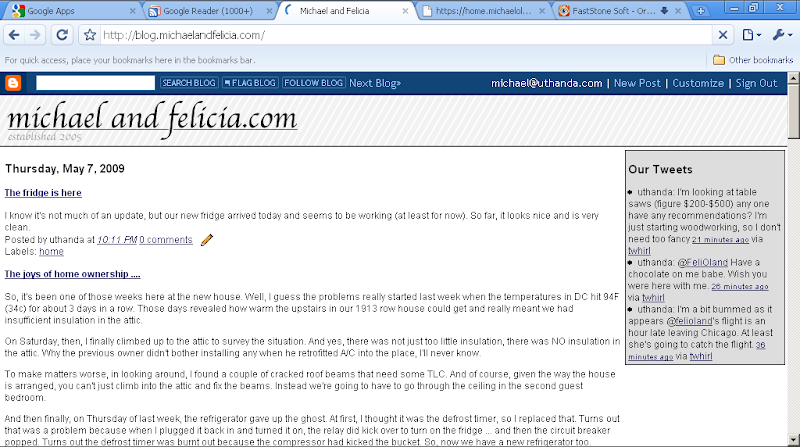 Why do I like it? Well, there's no one compelling reason that I can point to that makes me choose it. Instead, it's a small number of little things. I think the biggest reason may be that it's new and something for me to play with. As a nerd, that's definitely one of the things I like is to play with new things.

But in addition to that, I do find it oddly compelling. The UI is simple and on my Lenovo S10's small screen it tends to stay out of the way. And that's never a bad thing. In addition, it feels rather fast (faster than Firefox), but that could just be my perseption and not reality. Will it completely replace Firefox for me? No. But is it a great 2nd browser? Yah, you betcha. (sorry, I'm writing this while sitting in a bar in St. Paul, Minnesota).

There are a couple of things that will drive you nuts at first. For starters, the tabs are not under the menu and control bars, but are instead part of the title bar. Supposedly Safari 4.0 does it the same way, but I haven't really tried it yet to be able to say for sure. In addition, the location bar and the search bar are the same thing. Now, this isn't as big a deal as it seems because now you can just type in what you're looking for and Chrome will just try and sort it out. Finally, there's no menu bar, and in its place, the menu items are all pushed into two submenus on the right hand side (the wrench and gear icons in the screenshot above).

None of these things are major, but just something to be aware of before trying it.