I had someone come to me today asking about the solution we are using for live interpretation.  Apparently news of this is starting to get around and this made me realize it's time to update the technical details and start posting some of my lessons learned.

Let's start with our current technology stack.  It's fairly similar to what we were using before, but we have managed to simplify it a bit.  Here's a list of tech:

The configuration is fairly straightforward: 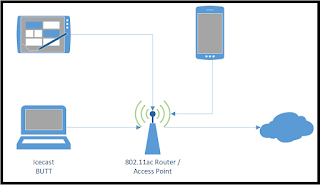 I will create blog posts to describe how to configure the software and a description of Windows vs Linux as a server OS for this purpose.  However, this is meant to be an overview of what we're using and how.

I also wanted to provide a list of issues we've run into so far and things to keep in mind:
At the end of the day, it's not the most perfect setup, but the price of starting up is fairly inexpensive.  Assuming you have a PC or laptop available, simply add the dedicated wireless router, mixer and microphone and you're up and running.

As we continue on, I will publish more thoughts and details.
Posted by uthanda at 2:04 PM